Give a Dog a Genome
The Give a Dog a Genome project is a hugely ambitious initiative run by the Kennel Club Genetics Centre at the Animal Health Trust to create the UK’s largest canine genome bank by sequencing the entire genome of one dog from each of 77 dog breeds. It was launched early in 2016 and is co-funded by the KC Charitable Trust. You can read about it in more depth here The IWHG has taken advantage of the KC offer to match-fund each sequence. For this project the cost of sequencing one genome was set at £2,000; the IWHG have provided £1,000 while the KC have match-funded that amount to provide the £2,000 needed to sequence one Wolfhound genome.
The Give a Dog a Genome project will sequence one Wolfhound with osteosarcoma, which the IWHG indicated was a major health issue in Irish Wolfhounds. Dr Starkey's osteosarcoma project will sequence a further four Wolfhounds with osteosarcoma and one not affected by osteosarcoma and not carrying the chromosome 11 markers identified by Dr Starkey’s team as increasing the risk of osteosarcoma development, this has been separately funded by the IWHG. (Read about the AHT osteosarcoma project here) This will give them the entire genome sequences of six Wolfhounds to compare 'affected by osteosarcoma' to 'unaffected by osteosarcoma', compare the Wolfhound sequence to the reference Boxer sequence, and also compare the Wolfhound genome to breeds identified as being at lower than average risk of developing osteosarcoma from the GADAG project.

August 2017
The Animal Health Trust sent us a lovely rosette and certificate to acknowledge and show their appreciation for our support and involvement in the Give a Dog a Genome project, we thought you might like to see the Irish Wolfhounds' award for participation. 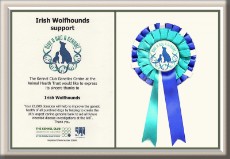 June 2017
The Give a Dog a Genome project has reached another project milestone, half of the breeds involved have been sampled and those DNA samples sent for sequencing. Irish Wolfhounds are a bit further ahead of the game as we came on board so early. The Wolfhound genome has been sequenced, the data has been downloaded and pre-analysis processing is underway. Remember there are actually six Wolfhound genomes involved including Dr Starkey's collaboration with the GADAG project, so the analysis will take a long time for us! Read the full update here.

19 December 2016
DNA samples from six Irish Wolfhounds, five diagnosed with osteosarcoma, and one older hound unaffected by osteosarcoma, have now been sent to a commercial laboratory for sequencing. The sequencing is expected to take up to eight weeks to complete, after which the data will be made available to the GDG team to download, process and analyse. The volume of data generated for each individual sample is extremely large and takes 3-4 days to download and process. The sequence data will then be shared with Dr Mike Starkey's team for them to conduct additional analysis of the data to attempt to identify any variants that contribute to Osteosarcoma. This process will take a long time and we should be aware that it is entirely possible that they will not be able to identify any variants that contribute to this condition. However, even if this is the case, the data still can and will be used in investigations of inherited disease in other breeds.

12 December 2016
The Give a Dog a Genome team have confirmed they will sequence a dog with osteosarcoma and the work will be conducted in collaboration with Dr Mike Starkey, Head of Molecular Oncology at the AHT. Dr Starkey has selected the dog whose genome will be sequenced and has provided a sample of high quality DNA for the purpose.

March 2016
The Animal Health Trust announced a major new research project by the Kennel Club Genetics Centre. The 'Give a Dog a Genome' project aims to sequence the entire genome of one dog from each of 50 breeds. To be one of the 50* breeds, each breed must pledge to donate £1000, which will be matched by the Kennel Club Charitable Trust providing the £2000 required to pay for the sequencing process.
The IWHG note our interest in being included and the IWHG pledge to provide the £1000 needed. The AHT confirms our interest and the Irish Wolfhound is accepted as one of the first breeds to sign up for participation in the Give a Dog a Genome project.
* A huge positive response from the pedigree dog community resulted in the project being opened to an even greater number of breeds than initially anticipated, currently the total is 77!